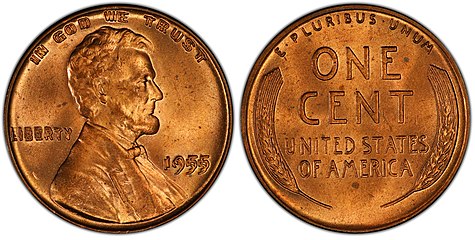 Early on in my nascent coin collecting career, I recall visiting a small coin store in Upstate New York. I remember looking at a 1955 Double Die Lincoln Cent my father was contemplating purchasing for his type set album. He wouldn’t settle for simply any coin to fill his collection. All the coins had to be a semi-key or better for the series. The rare coin dealer behind the counter said to my father, “This Lincoln cent has the biggest separation of details compared to any other example he’d ever seen. He said that he had  not owned a nicer example with such a spread from the first strike to the second.” My father smiled and agreed with how nice the strike was. He then handed the coin dealer back his coin, and we left the store without purchasing anything. On our way home, I asked dad why he chose not to purchase the 1955 Lincoln Double Die coin. I’ll never forget the lesson learned on that ride home, as my father explained to me the difference between a ‘mint error’ and a ‘die variety.’

An error coin is caused by a mechanical (machine) malfunction of some sort. Meaning, the machine itself jumped, bumped, slipped, turned, tilted, vibrated, or any one of probably a hundred things that could go wrong during the minting and striking process. Each malfunction that causes an error is unique and produces a particular coin. So with a some research and understanding, it is recognizable and explainable.. Some coins may be very similar, but a striking error is always technically unique to the particular coin, which makes every error unique and one of a kind.

Some examples of errors are:

This is the opposite is what makes a die variety coin. Die Varieties are produced when the actual die has some set of unique characteristics that is repeated exactly, or progressively, among multiple coin strikes. Most series have their own unique traceable die varieties. VAMs, Overtons, Cherry Pickers (Fivaz/Stanton), Snow, and Sheldon are just some of the number of  well-documented, published, and recognized die variety series.

Some die variety examples are:

During that trip home, I learned how the 1955 Double Die Lincoln cent was in actuality a die variety and not a mint error. 1955 Double Die cents were all struck from the same die. None of them could have any more or any less doubling than another example. They are not struck twice. They were struck only one time, but the die that struck them mistakenly had two dates and lettering. This caused the mistake during the minting process. After hearing the misleading sales tactic of the coin shop dealer, my father knew it was best to smile and walk away. Not only was it a smart decision for my dad, but it also became an early career lesson I will never forget.

Who Said There Was No Buried Treasure Anymore?